Design of Our Times

AREA ARCHITECTS & BUILDERS APPLY THEIR VISIONS TO OUR CITY’S HOMES 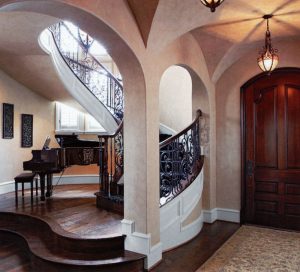 Dallas just gets no respect, to paraphrase the words of the immortal Rodney Dangerfield .  Ask  anyone  which  U.S.  cities top the short list for residential architecture , and you’ll probably hear Chicago , Boston or San Francisco…maybe even Savannah or Charleston  for  their  collections  of  historical  residences.  But a small minority of professionals believes that  it’s our  fair  city that actually boasts the best 20th-century architecture in the world .

“Dallas has a rich history of bringing the most important architects from the East Coast , West Coast and the Midwest to design homes-as well as commissioning Dallas and Texas architects who incorporate the indigenous qualities of the region into their modern designs ,” says Douglas Newby, president of Douglas Newby & Associates , which specializes in significant homes. “And in Texas, Dallas remains the center of the aesthetic universe.”

Want proof? Newby points to the fact that Dallas architects recently claimed three of five Texas AIA Design Awards: Lionel Morrison for the Sutherland residence; Gary Cunningham for the Pump House, the space complementing the Antoine Predock Turtle Creek House; and Oglesby Greene for a pair of townhomes that adds further luster to a growing collection of modern homes along the Katy Trail.

A Legacy of Architectural Excellence
Certainly, the homes that dot the North Texas landscape have been shaped by a diverse collection of visionary architects. They represent an exhaustive list of architectural styles and eras, from eclectic to mid­ century modern to Texas m ode rn. Dallas is home to significant homes by international stars such as Harwell Hamilton , Frank Lloyd Wright and Philip Johnson.

But not all the architects who placed their signature stamp on the region were formally educated. “Many of Dallas’ first generation of truly influential architects were self-taught, but excelled because of their innate understanding of composition , scale, materials and proportion, ” says Duncan Fulton, FAIA, managing principal of Good Fulton & Farrell Architects .

A number of architects are closely associated with the neighborhoods they helped create: Cliff Hutsell and Dines & Kraft , who greatly influenced Lakewood; eclec­ticist Hal Thomson , celebrated for his work on Swiss Avenue and the Park Cities; and Howard Meyer, who designed a number of prominent modern homes in Dallas, as well as one of the first classic Turtle Creek high-rises at 3525 Turtle Creek Blvd.

The list of contributors is long. Influential modernist Bud Oglesby was well-known for work in the Park Cities and Oak Lawn for many decades. Eclecticist Anton Korn, not as well known but highly respected within the profession, designed significant homes at 3628 Beverly; the entire 4200 block of Lakeside, and 4400 Preston Road .

With such a legacy to draw upon for inspiration, it’s no wonder that several architects working today have also developed illustrious reputations. For example,  Max Levy, who trained with Oglesby, has created extraordinary residences known for their exploration of light and shadows such as the House with a Sky View (2601 Dublin).

Frank Welch, who trained with O’Neil Ford, created many exquisite Texas modern and modern homes in Dallas’ finest neighborhoods. And in addition to being credited with introducing the first modern single-family attached home in Dallas found along the Katy Trail, Lionel Morrison developed several significant duplexes at 3509/3511 Springbrook.

World-Class Design
Of course, not everyone who aspires to a “couture” home designed by a famed architect can afford one. Prices typically are in the $1,000-per-square-foot range, which puts them out of reach for all but the most exclusive buyers.

For example, a magnificent formal estate home on 2.38 acres designed by renowned architect Robbie Fusch of Dallas-based Fusch-Serold & Partners is now under construction by luxury  builder  Bob Thompson on Strait Lane in Preston Hollow. Strait Lane offers some of the largest and most impressive estate homes in Dallas, ranging anywhere from one to 25 acres.

Currently listed at $12 million , the 18th-century French neoclassical-style home will be in the $16 to $17 million range when finished.

A second category of luxury homes can be classified as “private label” spec homes or homes where a top architect has come in and redesigned an existing home for the new owner, according to Newby. They generally fall in the three to seven million dollar range with prices of around $500 per square foot 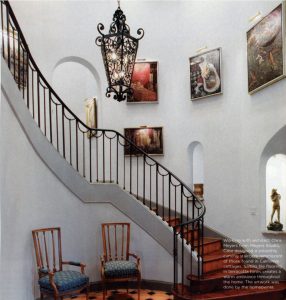 A good example would be a Preston Hollow estate home in Dentwood recently redesigned by Robbie Fusch. Fusch managed to create a design that was formal, yet open , taking advantage of the creek views the one-acre property offers. Dentwood is a small Preston Hollow neighborhood lined with one-to three-acre sites featuring many important estate homes. The area is home to O’Neil Ford’s greatest mid­ century modern home designed for the Haggerty/Hanley family as well as many other contemporary and eclectic homes.

A third category of luxury homes can be loosely classified as homes construct­ ed by builders who either use their own in-house architects to design a home or who customize existing architectural plans to suit a client’s specifications.

A few builders such as Team 3 Homes build only a handful of homes yearly in order to focus on creating one-of-a-k ind masterpieces. “We’re building significant homes at significant dollars,” says Neil DiGiammatteo, president of Team 3 Homes. While costs vary depend­ ing on the lot, complexity of home and customer selections, they generally fall in the $185- to $300- per-square-foot range, he says. As a registered archi­tect, builder, interior designer and third-generation craftsman , DiGiammatteo’s architectural roots allow him to design any style of home or build from existing plans. “I do extensive research for every project to map every detail of the architectural and design elements used for that particular style, to create a truly custom, one-of-a-kind home that ‘s historically accurate ,” he says. For one recent project , he drew upon the work of seminal architect Andrea Palladio (1508-1580) in designing a 5,946-square-fo ot Italian Renaissance villa in Southlake . About 450 years ago, Palladio ‘s country villas, designed as second homes for Italian nobles, began to appear in the countryside around Venice. “He was really creating what I would classify as an experimental-type architecture , because he was trying to convert these important buildings-palaces, churches, etc. — into something more livable,” DiGiammatteo says. In searching for a way to design a structure that was magnificent, yet inexpensive and comfortable, yet functional, Palladio devised a solution with three principal elements: dramatic exterior motifs; economical materials; and internal harmony and balance. Palladio’s influence can be seen in architecture throughout the world. For example, his double portico-loggia motif was employed in Jefferson’s Monticello and became a recurrent feature in Georgian, Adam and Colonial American architecture. Hie work revolutionized Western architecture in the 17th and and 18th centuries; was central to the development of the American Southern style in the 19th century and remains a major influence throughout the world even today.

New Materials, Endless Possibilities
Many industry professionals say that recent technological advances have had a major impact on the custom building market. “In the last several years, they’ve come up with some truly fantastic materials for designing interiors,” says Gage Prichard , president of Gage

Homes, which builds luxury homes in Glen Abbey , the Park Cities, Lake Forest , Preston Hollow and other upscale communities. ” The options are better than I’ve ever seen before in 35 years in the business.”

Modern marvels such as faux granite that rivals the real thing but allows designers to control color ; floor and bath tiles that mimic the look of granite and marble; and lightweight concrete for driveways offer trade professionals as well as homeowners an infinite number of choices. ” We are so lucky to be living in times now where we can do things never before possible because of space, weight or structural cost,” he adds .

Gage was recently named Custom Builder of the Year at the 2005 Vesta Awards presented by the H.B.A. for outstanding achievement in custom home build ing. Their feature  home,  designed by architect CA Nelson ,  includes  a wealth of innovative design details.

Designing For The Future 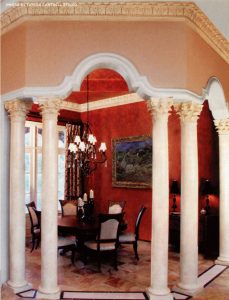 Meanwhile, while baby beamers mull over the infinite number of design choices they have today, at least one custom builder is betting on what they’ll need tomorrow .”There are a lot of people in the Park Cities and Preston Hollow who are getting ready to downsize in the future, but they don’t necessarily want to leave their neigh­borhood or move to  a  zero  lot  line,” says Randall Case, partner with Registry Fine Homes. ” They want a smaller, well-designed  home that’s still close to  their restaurants, doctors and dry cleaner, and they ‘re willing to pay for it.” Toward that end, in addition to offering “level one” wheelchair access features in family homes, Registry now caters to empty nesters in two categories : “early” empty nesters who travel, and traditional older nesters.

Invisible access features incorporated throughout the homes include flat-surfaced floors, 36 ” doorways, light fixtures and cabinets at wheelchair height , and hidden push rails in commodes, and roll-in showers in bathrooms . ” Good design is good design , whether you’re 8 or 80,” Case says. ” We’ve designed these homes with everything in mind-so you’ll never have to move again .” For the early empty nester, Registry offers “Registry ® Cottage ” designs, small luxury homes on premium sites built in a choice of architectural styles. They include all the features of level one homes, plus level two “lock-and-leave ” features such as extra-large, secure mailbox­ es and  floor safes. A unique porte cochere allows the homeowner  to back a car up to the kitchen and unload groceries directly into the pant ry.

For the older nester, Registry provides its “Registry® Ranch” designs with a level three access package: full scooter/wheelchair access in a single-story home. “As the empty nester population continues to increase, we believe that  even the building codes will be changed to incorporate a lot of A.DA (Americans  with  Disabilities Act) features,” Case says.

Currently, Registry has a couple of dozen homes under construction in Preston Hollow and a few in the Park Cities at a cost of around $150 per air-condi­tioned square foot. While Registry builds its average family home around 4,500 square feet, its empty nesters homes generally range from 3,500 to 4,000. “We think the smaller home is the wave of the future, not only because of demographics, but also because of rising energy costs and property taxes,” says Case.